Rachel ran the London Marathon for the Miscarriage Association in 2013.

The support around the course got me through those 26.2 miles, including the MA team at mile 18 at which point I badly needed a lift.

Having lost a baby myself, running the London Marathon for the Miscarriage Association was always going to be an emotional experience. It turned out to be more so than I could have imagined as the day before, my Nan passed away. But the show must go on (as they say) and I was so glad that I managed to finish.

No-one expects running a marathon to be easy, but it was much harder than I had anticipated. The last 8 miles were very very painful, I think in part because of the unexpectedly warm weather. After a truly awful winter, none of us were used to running in warm sunshine!

The support around the course got me through those 26.2 miles, including the MA team at mile 18 at which point I badly needed a lift. Everyone says that the support at London is amazing, but honestly, the number of people yelling my name was incredible! There were several points in the last few miles when I felt like walking and then someone would shout to keep going, and so I did.

Highlights were reaching halfway – when the band was playing Bon Jovi and I happened to get to them at the point they were singing “We’re halfway there”, running over Tower Bridge and past Buckingham Palace. And of course the very lovely (and heavy) medal I got at the end.

I felt truly awful for a while after I finished but managed to hobble to the MA meeting place to meet my family and the MA team for some much-needed food and a sit down.

I was honoured that the MA chose me to run for them, and very proud that I have managed to raise so much money for them, more than double the amount I originally pledged. I hope that I’ve done my bit to raise awareness of the work that they do. Would I run another marathon??? Maybe… 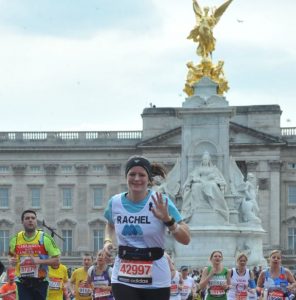