Pete ran the London Marathon for the Miscarriage Association in 2013.

It has been nearly two months since the VLM 2013 and I am in full training for my next event and looking forward to doing the VLM 2014, which is remarkable given I hated running in January when I started training for this year’s event.

Taking part in the London Marathon 2013 was both a major achievement and challenge.

I chose the Miscarriage Association as a charity because of the miscarriage that my wife had on Christmas Day 2011 and the upset that it brought to us both.  In addition to this, after speaking to other friends and family it made me personally more aware how regularly this tragic event happens and that people do not talk about it.

As a bloke my main duty was to support Jennifer and stay as strong as possible, knowing deep down how much I was hurting.  I spoke mainly to close friends and family until Jen had come to terms with things.  I had not heard of the charity at this point and therefore when I found out, it was a very simple decision and a small and personal way of both raising money for very important work and also and more importantly raising awareness of the event of miscarriage.

Raising the money was fantastic – speaking with people, being interviewed on the local radio and getting articles in the press made it a real pleasure.  Furthermore the support from the M.A. team was fabulous.  This all took my mind off the actual running which in the cold winter mornings was much needed!  There were times through the course of training when a poignant song would play on my iPod and I would find myself in tears but this made it even more special.  Just two days before the race, l nearly pulled out as a recurring torn calf muscle was back but I was too absorbed by everything and all the support which had been directed my way to let anyone down.

About a week before the race, Jen and I went out for a meal and actually had time to reflect on what we had both done and what I was about to do.  Jen had really supported me throughout the training just as I had tried for her in 2011 and the following week it would all be over.

I got to the start line nice and early on the morning of the race as I couldn’t sleep.  I chatted to loads of people and the common theme was the appearance of the big yellow sphere in the sky and no snow on the ground as no one has trained in temperature above 5 degrees in preparation!

The conditions were perfect and the atmosphere – I can honestly say I wasn’t expecting this.  It started with the 30 second silence in honour of the Boston Marathon and it was quite emotional standing on the start line thinking about that and what I was personally about to do and why.  The headphones went on and – we were off, part of the biggest marathon in the world.

The crowd was amazing from start to finish, from the chap on his Juliet balcony playing a DJ set, to the kids wanting high fives all the way round. The noise was something else and therefore the headphones lasted all of a mile and I decided absorbing this was part of the enjoyment.  The first 10km flew by but by Tower Bridge I was already feeling slightly tired and needing to hydrate and take on gels which generally I wouldn’t do until 16 – 18 miles.

At 18 miles there were some friendly faces from the Miscarriage Association and those promised jelly babies, although I did have to wait a few minutes for a new pack to be opened.  At this point I was on course to complete the marathon in less than 4 hours running with the 3.45 pacers.

This was all fine until 22 miles where all of a sudden I got cramp in one step from my thigh to my toes and then the next step the other leg went, I was like a statue and at that point I realised the last 4 miles were not going to be fun.  This happened three or four times in the last few miles and so I had to stop stretch, a short walk and then pick up the pace again.

It was at these points having people shout your name and encourage you was amazing and helped me so much.  At 25 miles  I suddenly heard someone shout my name and there was my sister in law with both my brothers and their wives and kids and my dad.  I had realised that I had missed my goal time and therefore ran back to them gave them all a sweaty kiss and cuddle and carried on my way with what seemed like fresh legs.  I then turned the corner to the home straight where I knew Jen, Millie, Herbie and my mum were watching.  Once I had spotted them, given them some big waves, and seen the poster Millie has made I knew I was home and dry.

The next few minutes were very surreal, I had a mix of emotion, firstly the joy of completing the marathon, the pain of hardly being able to walk and the massive annoyance that I had just run the marathon in 4 hours 7 minutes and all of this culminated in me then bursting into tears and nothing actually coming out which was quite amusing.

I was given my medal and then hobbled down to get my kit bag.  The next challenge was finding my family with a phone rapidly running out of battery, which was similar to my legs.  Once I had found everyone the achievement began to sink in and both Jen and I had a massive cuddle with lots of tears.  We then strolled up to meet the rest of the team at the magnificent St Martin in the Fields. 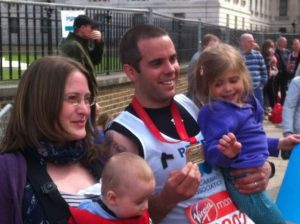 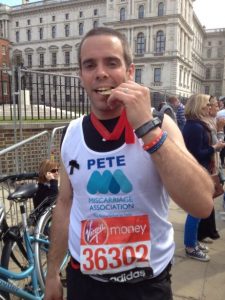 It has been nearly two months since the VLM 2013 and I am in full training for my next event and looking forward to doing the VLM 2014, which is remarkable given I hated running in January when I started training for this year’s event.  On reflection the entire event which includes deciding to run the marathon, the training in generally freezing conditions, support from friends and family, the support through the race has been amazing and something I will never forget, but the biggest thank you has to go to my wife Jennifer and our two fabulous children. Without their support, words of encouragement, smiling faces and cuddles when things were tough I would not have got through this and the money raised is my way of continuing to support people who go through miscarriages.

I will never forget my first marathon and one thing I have learned is that so many people go through what Jen and I went through and through talking to people we have found it much easier to come to terms with and this is something I will take away with me for the rest of my life.  Thank you to the team at the Miscarriage Association – you do a fabulous job.