Nicola Roper ran the London Marathon for the Miscarriage Association in April 2016.

Completing that marathon was truly one of the best days of my life and I enjoyed every second.

I ran the London Marathon in 2016 for the Miscarriage Association and can honestly say it was one of the best experiences of my life.

I was approaching my 40th year (which has a habit of making you take stock of your life) and I wanted to set myself a challenge. I was already running regularly and was inspired by  a friend who completed the London Marathon the year before. It had always been a dream of mine to take part in this iconic event since watching my Dad complete it 1985. I had never run anything like that distance before and knew the training would be tough therefore I also wanted to run for a charity which would keep me motivated during the dark, cold winter training.

My children were around 18 months and 3 at the time and we knew our family was complete but the babies I’d lost through two miscarriages were never far from my thoughts and I also wanted to do something for them. I thought running such a distance with my little ones who never quite came to be would spur me on and would also help to raise awareness and much needed funds for a cause which affects so many but is still rarely discussed. My miscarriages had a devastating effect on me, my husband and my family but it felt wrong at the time to talk about it. I’d also suffered ‘missed miscarriages’ where I didn’t experience any bleeding and wasn’t detected until I had a scan which I didn’t even know could happen until it happened to me.

Therefore I approached the Miscarriage Association and was lucky enough to be accepted into their marathon team. I was daunted by the fund raising challenge as well as the training but it turned out to be a cathartic experience. During the course of my fundraising I explained to people the charity I was running for and why which meant I shared my experience of miscarriage with others and many in turn shared theirs. This felt like a positive channel for my heartbreak at having been through this as I felt I was really helping to break down barriers in talking about it.

On the day of the marathon itself I was very nervous but as soon as I got to the start the adrenalin kicked in and I was so excited! I felt incredibly proud to be running in an MA vest – as I proceeded around the course the support from the crowd was immense and I felt I locked eyes with many people who were shouting my name as encouragement with meaning when they also saw the MA logo on my vest. I shared many moments with people who had been through the same thing.

Completing that marathon was truly one of the best days of my life and I enjoyed every second.

I thought of my little ones throughout and had a smile permanently plastered on my face! I raised over £2800 in the end and it will be something I will be immensely proud of for years to come. 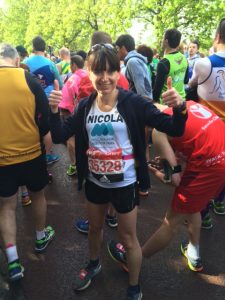 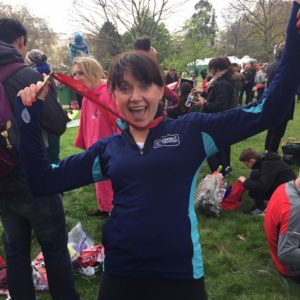