Natasha talks about why she took part in Step Up for the M.A..

I completed my Step Up challenge as a way of saying thanks for all the M.A.'s support for ourselves and others we know who have sadly lost babies.

Joining Step Up for the M.A.* meant so much to me as my husband and I have lost multiple babies over the years.

My first miscarriage happened when I was 18, then another at 21. We got married and at 28 I had another miscarriage. Six months after that we lost yet another baby.

We went on to have our rainbow who is 6 soon. A year later we found ourselves expecting again, another rainbow baby who’s nearly 4 and a half now, but we sadly lost her twin.

The support and advice from the Miscarriage Association website and Facebook community was invaluable. It helped in a weird way to know I wasn’t alone and that the grief and anger we were feeling was normal.

I completed my Step Up challenge as a way of saying thanks for all the M.A.’s support for ourselves and others we know who have sadly lost babies. And mainly so that people who find themselves in a similar, awful position in the future will still have the M.A. to turn to on their darkest days.

The challenge was also incredibly hard for me to complete as I have recently been diagnosed with ME, but I have managed all 250,000 steps! On a particular part of my route there was a robin every single morning that escorted me down the path and I know it was meant to be.

I know that I am so lucky to have moved on and to have my rainbows. My angels will always be with us, never forgotten, but I know how blessed I am. 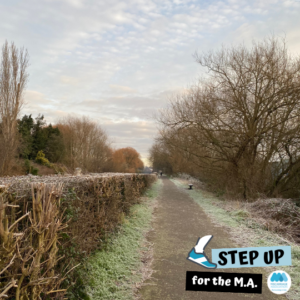