Lotty talks about why she took part in our Step Up fundraiser.

I needed a distraction, and a reason to force myself out of the house... It's become part of my healing process.

I came across the Miscarriage Association’s Step Up* challenge on Instagram while doomscrolling for miscarriage stories, while I was recovering from my 3rd one.

I found out there was no heartbeat just before Christmas 2021. After nothing happened over Christmas, I had surgery on New Year’s Eve. Obviously because of Covid, and because I have a 4yr old daughter at home, I went through this mostly alone.

I saw the challenge on the 3rd of January and signed up without hesitation. To be honest, I needed a distraction, and a reason to force myself out of the house.

For the first few days I walked around Ally Pally, bleeding into a massive pad. At first walking made the bleeding worse, but it felt important to keep going.

I walked a few times a day, thinking about my own miscarriage and the pain and injustice of it. Thinking about the other 249,999 miscarriages that have happened/will happen this year has made me feel like I have company. Part of a gang that nobody asked to join.

My daughter has started walking with me. She loves the night time walks the most. We count our steps out loud and take photos of our feet. We talk a bit about charity and fundraising, and how sometimes growing a baby in your tummy doesn’t work. She’s a constant reminder that I’m one of the lucky ones.

Some days I’m just not motivated to walk, but I’m being kind to myself about it. I’m determined to finish, but I might not do it all before 31st January. I think I’ll be sad when the challenge is over. It’s become part of my healing process. I might just keep on going!

I’ve received overwhelming support for this challenge from my friends, and have raised over £500. 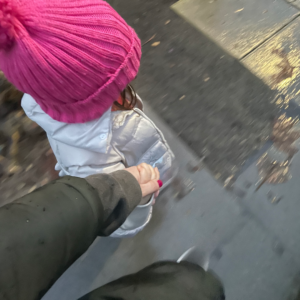 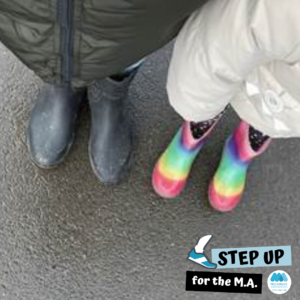