Kate Steps Up for the M.A.

Kate explains why it meant so much to her to take on a challenge for the M.A..

I just wanted to do something to raise awareness of miscarriage and baby loss and to help anyone else going through something similar. I needed something to channel my energy... Keeping active has definitely helped.

On Christmas Eve 2020, I had my booking in appointment with the midwife. I had noticed the smallest amount of spotting that morning and as this was my first pregnancy I wasn’t really sure whether to mention it or not. Towards the end of the meeting I did and she called the hospital to see if they could book me in for a scan. She asked me if Boxing Day was ok, to which I was surprised by the urgency, but said “yes, of course”.

Throughout the evening of Christmas Day the bleeding got heavier and I began to fear the worst. I arrived at the hospital the following morning and had to leave Noel (my partner) outside in the car due to Covid restrictions. I could see how much he wanted to be with me and although he was trying to be positive I could see that he was thinking the same terrible things I was. The walk to the hospital entrance on my own was just awful.

During the scan the nurse said she was sorry but our baby had stopped growing. I was 10 weeks pregnant. I couldn’t hold back the tears and began to cry immediately. It felt like somebody had ripped my heart out. I asked if I could phone Noel and they said “of course”. That was the hardest phone call I’ve ever had to make.

Over the following week I had 4 trips to the hospital including one to A&E as the pain had become unbearable, I could barely walk and again had to sit in A&E on my own while Noel waited outside. The following day, a scan confirmed that the baby had passed.

That week and the week that followed are somewhat a blur. Other than our immediate family (who already knew we were pregnant) I didn’t want anyone to know. The emotions were too raw and I couldn’t handle others people’s comments, judging, opinions and terrible clichés.

About a week or so had passed and we got a message from a friend of ours to tell us that unfortunately, they had had a miscarriage on Christmas Eve. I couldn’t believe it. We told them our news and over the next few days we had quite a lot of communication backwards and forwards. I couldn’t believe how different our experiences were, but ultimately we had both been through the most terrible time.

She actually told me that she had found telling people helped. I wondered if the same would work for me so we began to tell more people. Noel found this helped just as much as me. Yes there were some naive comments, but ultimately everyone was so amazing and I began to realise just how many women I knew had been through similar experiences. I couldn’t believe it. It’s still so taboo and I couldn’t understand why. I know nothing can prepare you for the loss of a baby but I couldn’t help but think I wish I’d have known more and that maybe if people did talk about it more the feelings of guilt, shame and embarrassment might not have been quite so intense.

Roll on a few weeks and I started to look at what help was out there. Things were still very raw and I was still having lots of bad days. But I just wanted to do something to raise awareness of miscarriage and baby loss and to help anyone else going through something similar. I thought about a blog, but wasn’t sure I was a good enough writer or anyone would want to read it, so when I found the M.A.’s Step Up challenge I thought it was perfect. I needed something to channel my energy. I could get my story out there and I could raise money for the charity. It seemed like just what I needed. I had missed the January slot but pledged to do my steps in 30 days from the 5th Feb to the 6th March.

I wrote my story and posted my fundraising page on my social media and sent messages about it to family and friends who weren’t on much social media. The response was overwhelming. Within minutes I had women reaching out (some I barely knew) to tell me about what they had experienced with baby loss and how they thought I was brave for getting my story out and doing what I was doing.

Do I feel brave? No. Do I feel an inspiration? No. I’m just one of the many women who will experience baby loss and the horrific feelings that come with it, both physically and mentally, and I just wanted to let other women know they aren’t alone.

I have to say, the challenge has certainly helped me through the last few weeks. There have been down days still including tears but Noel has helped in keeping me going and getting outside in the fresh air. Keeping active has definitely helped. In fact, I’m not sure whether I actually wanted it to end. It feels rather strange now.

My biggest piece of advice (for anyone looking for it) is not to take a day at a time unless you’re ready, as that can be too daunting especially at first – a day is a long time. Take it half a day or even an hour at a time. Small steps are key.

Thank you to the M.A. for the Step Up challenge and support. 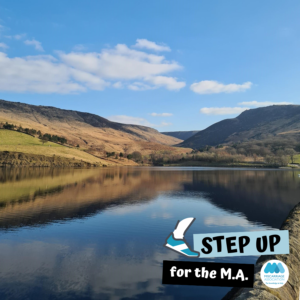