Hannah Steps Up for January

Hannah shares her story of why she joined the Step Up for the M.A. challenge.

I am very proud to take part in the Miscarriage Association's January Step Up challenge... It’s given me something to focus on.

After we got married in August 2018 we were so excited to start our own little family, and a few months later we had a positive pregnancy test.

I’ve always known miscarriages were common but as cliché as it sounds, I never thought it would happen to me. But I was 1 in 4. I was devastated and then began the journey I never thought I would have. I became 1 in 100 who suffered from recurrent miscarriages. I had 4 miscarriages and then we lost our son Oliver at 16 weeks. Nobody should have to go through this.

I am so grateful to have finally made it through with my little Oscar, but the reality of loss has had a profound effect on my life, with several diagnoses of PTSD and having to navigate parenting after loss.

I am very proud to take part in the Miscarriage Association’s January Step Up* challenge. It’s pushed me to become more active and it’s given me something to focus on.

This month we were given the news that my lovely Nan, who supported me through all the heartbreak, was terminally ill and on January 25th she passed away. As you can imagine this has been a challenge in more ways than one.

I hope that my story can help someone else not to feel so alone. Miscarriage is such an isolating experience, but I want my story to be one of hope. 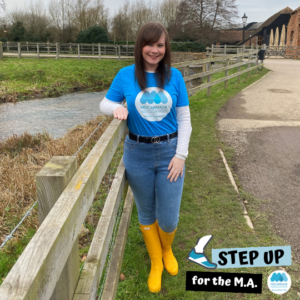