Hannah talks about why she signed up to the Miscarriage Association's Miles That Matter fundraising challenge during the coronavirus pandemic.

My most recent miscarriage was particularly distressing because it was right in the middle of lockdown… I realised that resources like the Miscarriage Association were the only support that some women had… so I decided to start to run for the charity as part of #MilesThatMatter.

Between November 2019 and May 2020, I had three miscarriages; two at 6 weeks and one at 8 weeks. My most recent miscarriage, on May 1, was particularly distressing because it was right in the middle of lockdown.

Alongside my husband, I had been juggling full time work, and looking after our two-year-old. My pregnancy, after two very recent miscarriages, felt like some kind of miracle, but I very soon realised I was bleeding and had very few resources to draw on because there was no childcare or family or friends, I could get to help me.

We had moved just before the lockdown and I hadn’t registered with a new GP yet, but I spoke with my old GP who called the local hospital, and, despite coronavirus they had me in for a scan and referred me to their support services, including counselling.  I feel very fortunate that I was able to access this level of care.

In addition to this, I had called the Miscarriage Association phone line and they had been very kind, which was much appreciated during a very lonely time and I also attended one of their zoom support groups, which really helped me as well.

However, I became increasingly aware through online resources including the Miscarriage Association forum, that many women around the country had not had similar support. They had been left at home and told to only go to hospital if their bleeding became serious.

I realised that resources like the Miscarriage Association were the only support that some women had. I had recently started Couch to 5k, so I decided to start to run for the charity as part of #MilesThatMatter. When I have finished the Couch to 5k programme, I will keep running until the 15 October. So far, I have raised over £500, which is over double what I thought I might originally get. 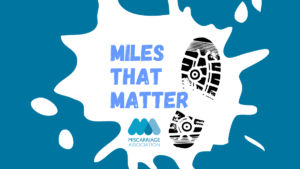