Angie shares the mixed reactions to her two early miscarriages.

I had one friend who simply said, ‘Angie I don’t know what to say’. That was perfect because neither did I.

I was open about my miscarriages and the responses to them were mixed. I would hear a lot of ‘at least you can get pregnant’, although I did say that to myself a lot too! A lot of people would tell me about their granny’s cousin who had thousands of miscarriages and then had six children. I never found that particularly helpful. I used to think, I don’t care, this is my story.

I had one friend who simply said, ‘Angie I don’t know what to say’. That was perfect because neither did I. We were both on an even keel emotionally.

Two days before my 12 week scan I started bleeding and didn’t know what to do. I rang the out of hours GP but they took so long to get back to me I called the maternity ward. They told me to come in on the morning of the scan.

The scan was really tough. I came out of the room to be greeted with 20 women with huge bumps. I had a second scan in the EPU. They were great and went through my options. It was at Christmas time so there was a delay in having the D&C.

Very soon afterwards I was pregnant again. It didn’t cross my mind that the same thing would happen. The second time I was referred to EPU because I had an ovarian cyst so I was getting scanned every week for five or six weeks. Week eight we saw heartbeat. The following week, there was no heartbeat. This one I took much harder. I was working in a coffee shop at the time. I brought a plate of food down to a table where a daughter was showing her mum scan photos. I broke down and my GP signed me off work for a week.

All I was doing was googling ‘will I ever get pregnant?’ and ‘will I ever feel better?’ Two periods later I found out I was pregnant again. Because of the cyst, I was seen every week until 12 weeks. Every week the baby was getting bigger and stronger yet every week I expected bad news. The support I had during this time was amazing. I don’t think I would have got through it as well without the wonderful midwifes. 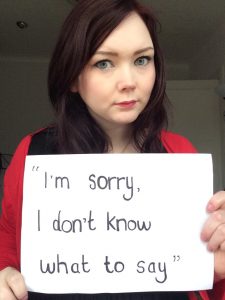 (July 2017) I am pregnant again with my baby due in August. Once again, I spent the first 12 weeks waking up every morning thinking, is this over. I will always have the memories with me. However, if I had either of the first children I wouldn’t have Adam. I have to hold onto that.

It so awkward to talk about it. If you have a child who dies you have been able to name them and it is easier for people to comprehend. I count my two miscarriages as children but I know many others don’t. I know people fear saying the wrong thing. You naturally want to help them – tell them what to do to fix this problem. Of course, with miscarriage there is nothing you can do. All they can do is say, “I am really sorry to hear that.”