Amy started to miscarry the night before her 12 week scan. She writes here about the physical and emotional experience of loss.

I don’t want to hear any comment that starts with the words ‘at least’.

We were trying for a baby, but you don’t know how you will feel until it happens. A month after trying we found out we were pregnant. At first there were a lot of mixed emotions but then, suddenly, it felt very real. No one knew we were trying and would have perhaps been surprised, but we felt we needed a baby to complete us. We discovered we were pregnant when we were away with Jake’s family in Wales. I was eating a lot which looked a bit odd as I am not a big eater. Jake’s mum noticed and asked if she needed to get the cot out of the attic.

During my pregnancy, I kept thinking that there was nothing there. But pretty much everyone said: ‘don’t be silly, I felt like that when I was pregnant and it was fine.’ I was at work and I started to feel like my period was coming. I went to the loo and saw some blood. I just started screaming. I called out to a colleague, telling them I was pregnant and needed to go to hospital. I was in a total panic.

Jake and Mum met me at the hospital. As I had my 12 week scan booked in for the next day they told us to go home and come back tomorrow. By the time we got home I was bleeding a lot. I called the hospital and they said we could come back in for 10.45pm. They did a pregnancy test which came back positive. That got all our hopes up. I had an internal scan that showed the sac was measuring nine weeks and there was no baby. The sonographer said we should still go for the scan tomorrow and that everything could be fine. When my Mum asked how likely that would be she was told ‘not really.’

That night I only slept for 10 minutes. I just kept seeing the empty screen with no baby. The next morning, we went back to hospital, where I sat with all the pregnant couples excited about seeing their baby for the first time. When we walked into the room the sonographer said: ‘let’s see your baby then.’ I started crying and Jake had to explain what happened the night before. I didn’t even look up at the screen. I knew there would be nothing there. Jake still had some hope left.

We were told we had three options, let it happen naturally, take some medication or have surgery. I decided to take the tablets. I was there for 15 hours. I had to take six doses because my cervix wasn’t opening. I was told I would experience mild period pain and a lot of bleeding. Mild period pain I could cope with, but instead it felt like full on contractions. I had to have codeine, gas and air and a pethidine injection. You get all the pain of going through labour, but without the baby at the end.

13 hours later I drifted off to sleep when they needed to examine me again. My cervix was still not opening. They wanted to keep me in for the night so Jake asked if he could stay too but was told no, it was a women’s only ward. We asked if someone else could stay with me and was told no. However, down the hall, where babies were being born, Dads are allowed to stay the whole time. This didn’t seem fair. There was no way I could stay there on my own so we went back home.

Once again, I couldn’t sleep. The shock of what was happening was keeping me awake – I just couldn’t process it.

A couple of days later the pain was unbearable. I was literally just rocking back and forth. At the hospital, they gave me an open access number. I rang them saying something isn’t right. Once again, I went back to hospital where I was examined. The nurse told me to cough and that is when the sac came out. The pain immediately went. I had to stay in for another five hours because I was bleeding a lot. The nurses who looked after me and my boyfriend whilst we were in hospital were great and made us feel as comfortable as possible at such an awful time. 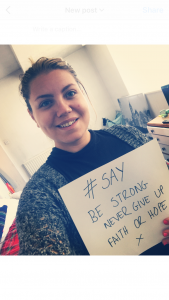 Once it is all over you are sent home to just get on with it. They gave me a leaflet by the Miscarriage Association. I didn’t really process what had happened until recently. It didn’t sink in that I had a baby inside of me and now it is gone. When you get pregnant you don’t picture losing it. I was in shock for a long time. However now the due date is getting closer it is on my mind a lot. Jake and I have both booked the day off so we can spend it together. It will be a celebration of the love we had for the child. It is weird the processing stage, you go through so many feelings.

I don’t want to hear any comment that starts with the words ‘at least’, ‘at least you are young’, ‘at least you can conceive’, or, for me the worst one ‘at least it wasn’t a real baby yet.’. All you want is for someone to give you a hug and acknowledge what has happened. I have some friends who will always change the subject but I want to talk about it, but it is such a taboo subject.

Since having my miscarriage I have heard so many people have experienced it. However, no one talks about it. When I had mine I found out my gran and my boyfriend’s mum have all been through it – I had no idea.

The feeling of loss never leaves, but that child taught us both how to love more than we ever could have imagined.

We have now bought a house together, got engaged and are getting married next year and what happened has made us stronger than ever.