Mark walks Cheshire’s 35 mile Sandstone Trail in a day for the M.A.

Throughout my walk I was getting messages of support and sponsorship from people I didn’t know but who had obviously suffered from or knew someone close who had suffered from miscarriage. This kept me going.

In the early 2000s my wife Amanda and I were trying for a family, as most newlyweds do! Unfortunately, our first pregnancy miscarried on Amanda’s birthday after 12 weeks. Bad luck, we thought! Unfortunately, this happened a further three times in a couple of years, culminating in the loss of our twin boys, Matthew and Owen, at seventeen weeks.

We were physically, mentally and emotionally drained and giving up hope. We didn’t know why this was happening and while we were referred to a specialist miscarriage consultant, he had theories but no hard evidence to understand why it was happening either. The Miscarriage Association supported us through this time by providing information and support at a time when we really needed it. In fact the most important thing we learnt was that recurrent miscarriages were not uncommon and in fact there were many others in our position.

Thankfully after almost five years of trying, our first daughter, Ruby, was born.  Then we had another miscarriage a year later, followed by the birth of our second daughter, Thea.

So, while this was a happy ending for us, we realise it is not the case for everyone, and it is important that this important charity is recognised for the good work it does in supporting those suffering from loss and those trying to find answers. I hope one day there is not the need for the Miscarriage Association, but while there is, I decided to support them.

I had previously raised £800 for the M.A. through a couple of runs. While challenging, they did not really push me to my limits so I decided to do something which would, and the Miles That Matter’ campaign spurred me into action!

There is a local trail called the ‘Sandstone Trail’ in Cheshire running from the river Mersey in the north, to the Shropshire town of Whitchurch – and I had always wanted to complete it. After walking until my body couldn’t take any more, being stung by nettles to the point my legs were throbbing, getting lost many times, facing up angry cows and sheep, I completed the Sandstone Trail in 14 hours.

I had a neighbour supporting me for a third of the way, but he had to drop out through injury so I had to complete most of it myself. Throughout my walk I was getting messages of support and sponsorship from people I didn’t know but who had obviously suffered from or knew someone close who had suffered from miscarriage. This kept me going and helped me raise £827 to date for which I am very grateful for, and will hopefully go some way to helping others who continue to suffer from miscarriage. 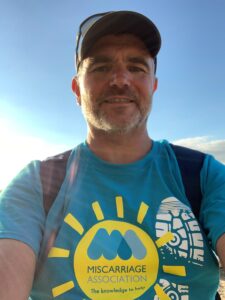