As a bit of a coping strategy, we decided that I would undertake a huge challenge to raise some money for the Miscarriage Association... It was incredibly emotional, and it was totally worth it.

In July 2020, my wife Jenny and I suffered a miscarriage, losing our twins in the first trimester. This was our first experience of pregnancy, and sadly, miscarriage. To make matters even harder, it happened during the pandemic, meaning Jenny had to go to the hospital alone (multiple times) while I waited in the car outside.

As a bit of a coping strategy, we decided that I would undertake a huge challenge to raise some money for the Miscarriage Association who helped us in our hour of need, and also to raise awareness about miscarriages generally. After some consideration about what a worthy challenge would be, I signed up for an iron distance triathlon.

I started training in October 2020 by doing 6 hours a week – 2 hours swimming, 2 hours cycling and 2 hours running. That first week of training seemed epic but little did I realise just how much it would ramp up over the next 9 months.

By December I was regularly getting up at 5am to go for 8 mile runs in the pitch black and freezing cold before work. On Christmas Day I was up at stupid o’clock, resisted the urge to see what Santa had bought and instead went for a 10 mile run. Weekends were for long bike rides, which, due to the wintery weather, were often restricted to a turbo trainer in my garage. It was common for me to do 3 or 4 hours on my static bike in one go.

The New Year bought more inclement weather, but it also bought a respite in lockdown rules and by March I was swimming in my local lake. That turned out to be almost as stupid as the 5am runs – I would swim for an hour in 8 degree water and then not be able to even hold my car keys because my fingers were so frozen, let alone drive home.

Eventually training conditions got better and my training was consistently reaching 20+ hours per week. At one point I did a 26 hour week which is probably more than I worked that week (unless you count sleeping at my desk). It was a long hard slog but the donations were flying in and so was the support from all of my friends and family.

There were a few touch and go moments, including a DIY accident that led to 4 stitches in my foot and an enforced 10 day break from training. Eventually though, I made it to the start line.

Needless to say, it was a monumental day. After 1hour 35mins trying not to inhale too much lake water, I dried off best I could and jumped on my bike. What followed was tough. As if 112 miles cycling up and down hills wasn’t enough, the torrential rain and potholes made things even trickier. It was a 3 laps course and fortunately I spotted my family at the end of lap 2, which gave me a much needed boost to keep going.

In the end the cycle took me over 7 hours but finally I got it done. It was 3pm and I’d been exercising consistently since dawn. Just the marathon to go then! To be honest, the run was a bit of a blur. I limped around in 4hours 40 minutes, and on multiple occasions I had to dig deep and remember why I was doing this.

Crossing the finish line I was met by Jenny who gave me the biggest smile and the biggest hug. It was incredibly emotional, and it was totally worth it.

In the end, I managed to raise £4,261 for the Miscarriage Association. The event took 9 months of gruelling training, 13hours 39 minutes of racing, a lot of cheering from my wonderful family and a countless amount of fig rolls.

The support we received after our loss helped us to survive it. The kindness shown by Miscarriage Association and by all our friends and family will stay with me forever. I’m glad I was able to give a tiny bit back. 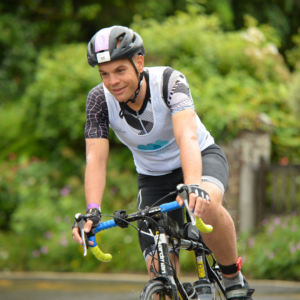 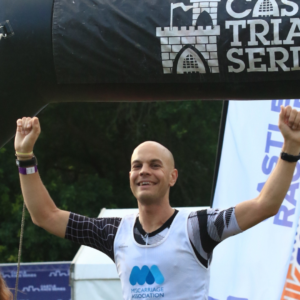