After years of fertility problems, Tamar and her husband Paul had a miscarriage following IVF. Here Tamar shares their story of fertility treatment, loss and how they support the M.A. with their business.

Seeing those two lines felt like a miracle. We couldn’t contain our excitement, after years of trying we thought this was our moment... But our dream was short-lived. Our world fell away when we had an early scan; our baby didn’t have a heartbeat.

We’ve wanted to be parents for what seems like a lifetime, it’s been a dream of ours since we got married.

Since I was a teenager, I knew having a child might always just remain a dream for me. I was diagnosed with rheumatic heart disease and Sydenham’s chorea – rare conditions which I was told might prevent me from carrying a child. But in 2012, I had open heart surgery and doctors said I could come off my medication and finally start trying for a baby.

It was amazing news, we felt like our dream would finally come true. But three years later we still didn’t have a child to share our love with. We spoke to our GP about struggling to conceive and we were later referred to our local hospital for investigation.

Test after test, the answers to our struggles never came. There was no obvious reason as to why we couldn’t get pregnant – the hospital called it undiagnosed infertility. We felt like we were failing somehow at something which came naturally to other people; it was so difficult to deal with.

The support we received from our doctors was brilliant. We were told we could have two rounds of IVF on the NHS – each would include a fresh egg implant and a frozen embryo implant.

In 2018, I had my eggs harvested under general anaesthetic and a single embryo was implanted. A negative test two weeks later confirmed the embryo didn’t survive and the remaining embryos were not viable to freeze either.

Then we had our second round and, while the fresh embryo didn’t take, a frozen one gave us a last chance on the NHS. One week later, I had a positive pregnancy test.

We were over the moon. Seeing those two lines felt like a miracle. We couldn’t contain our excitement, after years of trying we thought this was our moment. We told everyone and they were just as excited as we were.

But our dream was short-lived. Our world fell away when we had an early scan; our baby didn’t have a heartbeat.

It was the most horrendous time of our lives. The pain hasn’t gone away. It’ll never go away, but we’ve learned to not let it consume us.

We have so much love to give, we so desperately want a child of our own. We feel ready to try again and we’ve been saving for a third round of IVF. Unfortunately, the pandemic put a hold on our plans and I’ve since had another health scare, meaning I’ve restarted my heart medication.

Although it feels like everything is against us, Paul and I will never stop hoping we’ll someday have our own little one.

We’re so grateful for the support we’ve received from loved ones, doctors and charities like the Miscarriage Association. Their work is so important for people like Paul and I. That’s why we’ve wanted to help promote it however we can.

We started our own candle and wax melt business from home in 2018, so I could have the flexibility needed for our IVF treatment. We’ve since teamed up with the Miscarriage Association to create a candle and wax melt with 30% of the sales being donated to the charity. It’s our way of supporting such a meaningful cause. 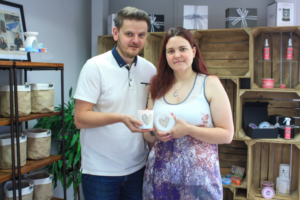