Sally had 6 losses, including an ectopic pregnancy and writes about coping with her feelings during her pregnancies.

To be pregnant again after loss is a very vulnerable place to be.

Between March 2014 and now, March 2018, I have suffered through 6 pregnancy losses in total, from chemical pregnancies to missed miscarriages and most recently, an ectopic pregnancy. I have yet to have my ‘rainbow baby’.

To be pregnant again after loss is a very vulnerable place to be. You are stepping into that possibility of feeling that raw, indescribable pain yet again and the innocent excitement of a first pregnancy is no longer possible.

It takes courage to make the decision to try again – courage I’m not sure I ever really felt. Each time I fell pregnant I would cry. Just cry. The thought of feeling that sadness of loss again was too much. The worst I probably felt was after falling pregnant in summer 2016. My 3 closest friends were all pregnant too, and I thought maybe, just maybe, this was how it was meant to be. We would all do it together. Sadly that pregnancy ended just 5 days later, and my 3 friends all got their babies (thankfully). But I was literally that statistic – 1 in 4. I didn’t cope well after that and only see my friends’ babies occasionally.

After my ectopic my mental health really suffered.  It was 6 weeks before our wedding and I was thankfullyable to be treated with methotrexate, rather than surgery. The wedding kept me occupied, and it wasn’t until a few weeks after that it hit me. I ended up being diagnosed with PTSD and panic disorder. Grieving for 3 years straight had taken its toll, and I had just given up. It was too hard. But with time, patience, self-love and care, and a wonderful husband, we got through it.

I still have bad days, and sometimes that sadness is overwhelming. But I am better equipped to deal with my feelings. I know it’s okay to not be okay, but I also know it’s okay to live your life again. You won’t ever forget what happened to you, and that baby you gave life to, but it’s okay to smile again. It’s okay to have hope. If you don’t, what else is there?

Even still, I can’t give up that hope. I am part of a wonderful network of bereaved mums and dads who all support each other, and they give me hope each day that I can get my rainbow after this long storm.  It is possible. 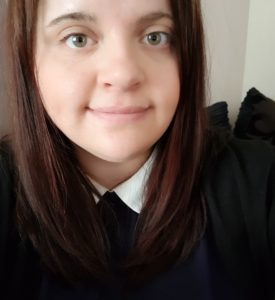