Nicola found that being open with work colleagues and friends about her losses meant that people started to open up in return. She reminds us too that not everyone wants to do so.

When you’re going through baby loss, or have lost a baby, the most common of workplace chat can trigger feelings of despair or grief.

I have been pregnant eight times and I have two living children. Six of my babies died during pregnancy as I suffer from recurrent miscarriage.

My first pregnancy ended at seven weeks in miscarriage, which was a huge shock but we put it down to bad luck. I was pregnant again soon afterwards and my son was born after a normal pregnancy. When he was one we decided we were ready for another baby and when we found I was pregnant we were thrilled. At seven weeks I had a healthy looking baby with a heartbeat, but at ten weeks we discovered that the baby had died and I miscarried. It was a huge shock.

I went on to suffer another four miscarriages, always at the same point in the pregnancy – seven weeks. I was distraught and desperate, it felt like everywhere I looked my friends were pregnant and having healthy pregnancies and babies. It felt so unfair.

It took a long time, but while under medical care and a treatment plan for recurrent miscarriage, eventually I was pregnant with my daughter who is now 16 months old. 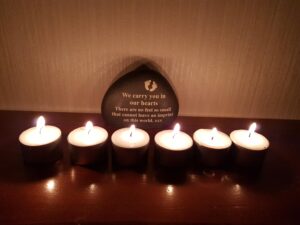 Miscarriage is extremely lonely and isolating, mostly because few people talk about it. I am a very open person and I cope by talking about my experiences.

Through being open with colleagues and friends about what happened to me, I found that people started to open up in return, sharing their experiences of baby loss. Sometimes it was in person, sometimes they sent me a message privately. All of them had struggled to cope with what happened to them in a society that makes it taboo to talk about it. Many of them hadn’t told anyone about their losses.

I’ve had feedback from friends and colleagues that talking about my experiences has helped them to know how to support a friend or family member who is going through similar.

In the workplace it’s easy to forget that people have their own battles in their personal lives, and not everyone feels comfortable speaking about their grief with colleagues. It’s lovely to celebrate a pregnancy but it’s important that people are mindful that not everyone gets pregnant easily or gets to have their baby.  If you know that a colleague has lost a baby please try to be sensitive to their feelings.  I was always pleased for anyone who had a baby, but at the same time wanted to scream ‘why can’t it be me!?’.

When you’re going through baby loss, or have lost a baby, the most common of workplace chat can trigger feelings of despair or grief. I have had days when I would be feeling OK, but then a colleague would send round their baby scan picture to announce their pregnancy and I would end up crying in the toilets.

One workplace had a ‘guess the weight of the baby’ competition on the department noticeboard, which I had to walk past every day having just had surgery for a miscarriage. Common jokes about the ‘office pregnancy chair’ and ‘who’s going to be next?!’ can be really hurtful for anyone suffering from infertility or experiencing baby loss.

I was lucky to have a supportive manager who I could talk to about my losses. He gave me the time off when I said I needed it, and he read the Miscarriage Association resources to help him understand how to support me. If you’re a manager please consider doing the same as, the more you support those in your team who are struggling, the more likely it is they will be able to cope.