Nicola had multiple miscarriages and shares how she felt during her pregnancies.

Being able to be open with people, and have them listen to me has really helped.

I’ve had five pregnancies in my life, but I still don’t have a child.

Five losses has been a lot to deal with both physically and emotionally but myself and my husband have made the decision to keep going and keep on trying.

Each loss has been so difficult and for me it wasn’t a question of if we should try again, but more so WHEN to try again.

I knew I still wanted to have a baby, but I also wanted time to grieve properly. I was conscious of not ‘replacing’ my lost baby. I needed time to heal both physically and mentally.  Myself and my husband took time to make sure we both felt ready. That’s not to say it was easy – it was still really scary for us both.

With each new pregnancy, I found it hard to be excited.  I so wanted to jump up and down and celebrate, but I was conscious of the fact it might not end the way I’d hoped. That thought was something I’d never thought of before, and it’s not a nice thing to have to face.

Strangely enough, the more losses I’ve had, the better I deal with discovering I’m pregnant. I now allow myself to get excited, because well, why the hell not? I deserve it! I know that one day I WILL get that joy of holding my child, and that positivity helps me cope with everything.

I found that starting a blog also really helped me. It put me in touch with other women going through similar things and I could reach out to them for support and advice. I think it’s so important knowing I’m not alone. Being able to be open with people, and have them listen to me has really helped. I’m in a much better place now and I’m still really looking forward to what the future will bring. 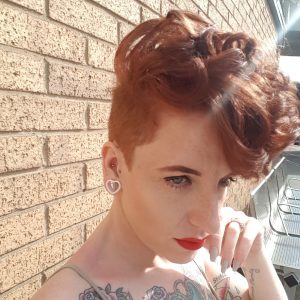