Natasha and her husband have experienced repeated early miscarriages, as well as the loss of their son at 19 weeks, but they remain hopeful. Natasha shares her thoughts here.

I have learnt that people would make thoughtless comments just to fill the silence, as they simply didn’t know what to say.

My husband Jay and I were married for two years when we decided to start a family. After a year of trying we sought professional help, and following tests, I was diagnosed PCOS and mild endometritis. We were offered Clomid and soon fell pregnant. We were both so excited and told our family. The excitement soon came to an end when I miscarried at 11 weeks. I remember being told, ‘at least you can get pregnant.’ I couldn’t get my head around what had just happened, but I was being told not to worry, that I would have another one.

We continued Clomid for 10 more cycles and I had a dye test, ovarian drilling and started taking metformin. After that we had four unsuccessful cycles of IUI. We then started the process of IVF, but I fell pregnant naturally with my third pregnancy.

Everything was going well until 19 weeks when my waters broke and we sadly lost our son, Aiden. It was a horrific experience. I also contracted an infection where I nearly lost my life. That was really hard to go through, but the hardest time for us both, was preparing a funeral for our son at the same time my body was producing milk for him, so it was a hormonal disaster.

In all honesty, I hit a wall and I wasn’t sure if I would get past it. Like many who have suffered, I felt that this was not meant to be part of the plan. I felt isolated and would find myself playing the blame game.

Having been though both early miscarriages and a much later one at 19 weeks with Aiden, it was remarkable how different people’s responses were. People treated Aiden as a person. We received so many cards, flowers and messages of support. It was overwhelming, but in a loving way. No one said, ‘at least you can get pregnant’, or ‘just think of it as a bunch of cells’. 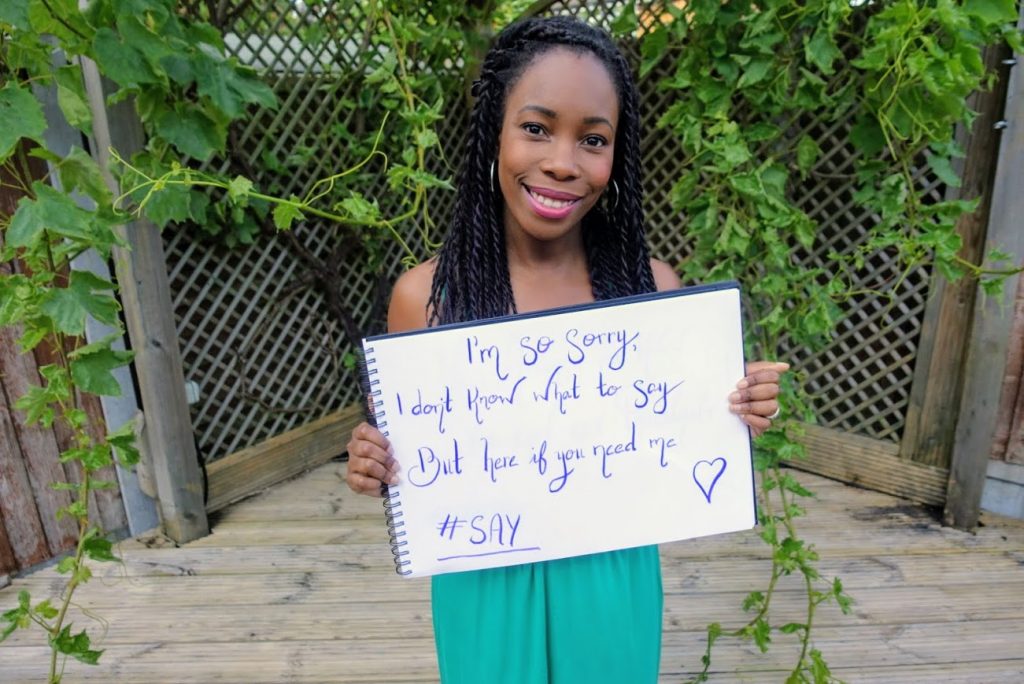 Everyone is different and there is no one way of how you should be feeling. I understand that it is hard to know what to say to someone who has miscarried. That is why I think awareness is so important. We need to get the message out that you don’t need to know what to say, or put a positive spin on it. Just saying you’re thinking of them is enough.

Since losing Aiden, I have sadly lost four more babies early on, between 4-10 weeks.  Through my journey, I have dealt with both the NHS and private clinics and had good and bad experiences with both. Because we got pregnant so many times we don’t really want to tell anyone. We thought it was us giving people hope and we were feeling like we kept letting them down.

I am a true believer that no matter how many weeks you miscarry at, it is still a loss and still a baby to its parents. Not a product (a term often used by the NHS). Unfortunately, unless you have experienced the loss of a baby, people may empathise, but will never understand. Through my experience, I have learnt that people would make thoughtless comments just to fill the silence, as they simply didn’t know what to say.

Due to having so many miscarriages, I have experienced so many different emotions. There were times where I have picked myself up and carried on with life, and the other end of the spectrum, where I couldn’t get out of bed.

My husband and I have had to deal with both first and second trimester miscarriages, with natural passing, D&C, and being induced. I mention my husband, as it wasn’t just me who has gone through the loss, we have both mourned for what we had. Both of us support each other and we are each other’s cheerleaders. Each month when we find out we are not pregnant, we still celebrate with a glass of Prosecco and a nice meal. It is so important to make the most of what you have.

I have been writing a book about my experience and it has really helped me to process what has happened. I also thought my experience may help others. I have been through so many miscarriages, but I am still standing strong and I am still happy. I know there are a lot of women who are really struggling and would like to reach out to them.

My last miscarriage was in January 2017. In total, we have been trying for eight years. We are not giving up yet. And we still count our blessings; we have each other, our faith and our family and friends. Of course, I wish we hadn’t had to go through this, but I am determined our experience will not be wasted and will use it to help others who are dealing with miscarriage.