Gemma writes about her experience of recurrent miscarriage and taking part in the RESPONSE trial.

After getting married in May 2013 we were delighted to fall pregnant in the September of that year. Just two days before our 12 week scan I started bleeding. We went up to the Early Pregnancy Unit and a scan showed that sadly our baby had no heartbeat, and had passed away a few weeks earlier, and a missed miscarriage was diagnosed. We opted for medical management.

After Christmas, we decided to try again, but it wasn’t until May 2014 that we fell pregnant. Sadly a few weeks later I began bleeding. And another miscarriage was diagnosed at nine weeks. This was a full natural miscarriage without the need for intervention. My body bounced back quickly and we fell pregnant again in September 2014, only to start bleeding after a few weeks. Yet again another miscarriage was diagnosed at eight weeks and we opted for the surgical management.

We had all the blood tests and full genetic karyotyping as our third loss showed an issue with chromosome 16. But no medical reasons were found for our recurrent losses, and it was put down to terrible luck.

We decided to try again and took part in the RESPONSE Trial, at the Edinburgh Royal Infirmary. We enrolled in January 2015, and fell pregnant in February 2015. We decided to take part in the trial as after three miscarriages we wanted to try anything that could help improve our outcome of starting a family. Plus, knowing how heart breaking it is to suffer recurrent losses, we wanted to help in any way we could to protect other couples from this pain in the future.

The double blind trial involved daily injections of either a drug or placebo for the first 12 weeks of pregnancy, and we got several extra scans and a lot of extra support from the trial team, which was invaluable. I suffered a lot from anxiety during this pregnancy due to previous losses. In the third trimester, I had a lot of extra monitoring at the day assessment unit and the team were so supportive and reassuring. I feel very lucky to have had such a wonderful care plan which has made a stressful time so much more bearable. We felt very well cared for and the team at Edinburgh have been incredible throughout. Our daughter Marin arrived safely on 1st November 2015.

The Edinburgh Royal Infirmary has a great Early Pregnancy Unit and throughout our recurrent miscarriages we had a lot of care from the staff there for which we are very grateful.

I found it awkward with people not knowing what to say about miscarriage and often saying the wrong thing and making things worse. I felt very lonely during the recurrent miscarriages as I felt a few people reached out when the first one happened but as I experienced subsequent miscarriages people didn’t know what to say, so they said nothing at all. And I felt very isolated.

I found it very difficult to be happy for other people’s pregnancy news and I was so tuned into seeing pregnant bumps and social media pregnancy announcements, it was so difficult to focus on anything else in life. It seemed like a much easier journey for others.

Pregnancy after miscarriage is very nerve wracking. That innocence and joy of your first pregnancy is lost and I never managed to enjoy my full-term pregnancy with my daughter as I was convinced I’d not end up with a baby as something would go wrong. 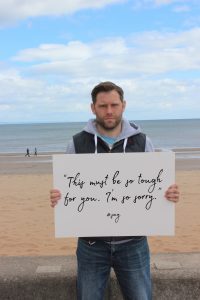 Now I have a baby people presume that I don’t think about my losses. But each of the babies conceived before Marin still very much feel like our family. I saw two out of the three babies’ heartbeats and on the due dates of each of the babies my husband and I went to a florist and bought a beautiful white rose that we left float into the tide at sunset at our local beach to commemorate the life we made and lost. 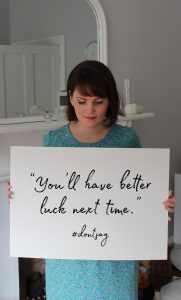 I try to talk openly about my miscarriages and I hope to help break the stigma surrounding discussion of baby loss and to help other people share their stories. I want to be the person that friends or family can turn to if they suffer a loss, as it is very difficult to know who to talk to and how you’ll be received. It’s so important talking about this very sad but all too common part of the pregnancy journey, and the more baby loss is discussed, the easier it will become to know how to support those affected.

I feel very fortunate to have my daughter and proud that I am feeling ready and brave enough to try again as I know there is a chance I will suffer future miscarriages, but I now have the support network around me to be able to cope if the pregnancy sadly fails.”

I’ve found that talking about miscarriage makes people feel awkward. People to do not know how to respond, so fill the silence with a well-intended yet often clumsy response like ‘At least you know you can get pregnant’, ‘Some things aren’t meant to be’, ‘You’ll have better luck next time’. I think part of the problem with it not being widely talked about means when it happens to you, it is such a shock. You feel like you’ve failed and that, you feel like you’re the only person that this happens to and that you are forever going to be without a child. It is easier to talk to people who have been through a loss, because they understand better.

Our first miscarriage was very private. With the second we opened up more. But the more it happened the less people wanted to talk about it. The first time people gathered round, the second time you could see people felt uncomfortable and the third time people just didn’t know what to say, so they said nothing. That was the worst, and the loneliness it brings with it. When you’re going through a tough time in life you want to be scooped up and looked after and protected. But when people feel uncomfortable about the kind of sadness you are feeling, it is very isolating.

Going through something like this does affect your relationships with people, and it has brought me closer to some. But in turn it has made me more distant from others. You need people to be open about talking about it rather than avoid either you or the topic.