Fiona writes about her early losses and society's misunderstanding of miscarriage.

I would be told ‘at least it has happened now, not later,’ or ‘it wasn’t meant to be.’

My first miscarriage was in December 2015, where at 10 and a half weeks pregnant I noticed some spotting. I managed to get a scan at the EPU later that morning where I had a gestational sac measuring just six weeks. We then had the painful two week wait to get rescanned and confirm that the pregnancy had failed.

We then got it confirmed on the 23rd of December that I was miscarrying. I opted for natural management, but was given no information about what to expect. It was at this point I discovered the Miscarriage Association, whilst searching the internet looking for information and personal stories. I ended up getting contractions and delivering the remains of this pregnancy on Boxing Day.

My second miscarriage was in April 2016. As you would expect, when we found out I was pregnant again we were both excited and terrified. I was testing every morning hoping to see the line get darker, and was convinced it was getting lighter. We saw our GP, who was really supportive and he arranged to test my Beta HCG to try and put my mind at rest. We found out we were pregnant on the 11th of April, our first wedding anniversary, and got our first blood test two days later on the Wednesday, and then Friday. The following Monday morning, I got a call from the surgery, arranging for me to come in and discuss my results. I instantly panicked knowing that it’s never good when they want to see you in person. I called back once I’d had time to let it sink in, and asked that my GP called me when he had time. He called back within five minutes and was really good at explaining my results to me and saying that while they hadn’t quite doubled as he’d hoped, it wasn’t definitive. He was trying to refer me for an early scan to help reassure me further. On the Tuesday morning, I woke up to heavy bleeding, much like a period. I called the EPU, who took me straight in. They carried out a urine pregnancy test that came back negative and carried out a pelvic exam, clearing as much of the pregnancy as they could using swabs. After spending the morning on the ward, they allowed me to go home.

My third miscarriage is happening right now. Given our history, we chose to get a private scan at seven weeks. I was measuring four weeks and five days. I knew that I ovulated late though, so expected the scan to be around six weeks, so tried to stay calm as I knew that many people measured a week or so behind at this stage. I did a good job of convincing myself that everything was fine, and each day that passed without a bleed, I grew more confident, and more attached to our pregnancy. Then at nine weeks two days, I noticed a small amount of brown (old) blood. I called the EPU straight away, and they booked me in for a scan two days later. The midwife I spoke to was really nice, and explained that people often get breakthrough bleeding around the time their period would have been due. I studied my calendar and decided it was possible and tried my best to stay calm.

We went in for the scan, by this time I should have been nine weeks four days. One again I had a gestational sac measuring six weeks and two days. Still no sign of a foetal pole. Both my husband and I knew exactly what was going on and had to relive the experiences we went through previously. I was sent to empty my bladder for the internal scan. Still no joy. I went behind the curtain to clean myself up and get dressed again, and my husband later told me that he saw the nurse that was assisting me raise her glasses at that stage to wipe away a tear. After putting my trousers back on, I remember it just hitting me like a wave. We were losing our third child. I was unable to finish getting dressed. I just sat on the chair behind the curtain, willing my husband to break the rules and come behind the curtain. He did realise I was taking longer than usual, and asked the nurse if he could come and see me. He hugged me, and helped me put my trainers on.

We had our rescan two weeks later to confirm the miscarriage. After we sat with a lovely nurse who listened to us and started to fill out the paperwork to refer us to the recurrent miscarriage clinic. It was a strange morning for us. We knew what the result of the second scan was going to be, so the sadness wasn’t as present this time, and we were both just so relieved we were finally going to get help that we felt strangely positive about everything that morning. 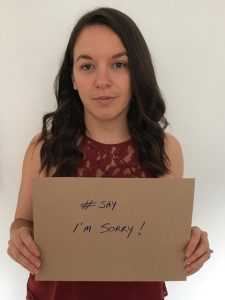 It’s now just over three weeks since we had that first scan and I’m still waiting to pass the pregnancy, as once again I’m trying to let it happen naturally. I don’t think people realise what a drawn out process miscarriage can be – as unless you’ve been through it, you assume that you start bleeding heavily all of a sudden, then that’s it. It’s only once it happens to you that you find out about missed miscarriages and the long wait that can be involved.

Miscarriage is vastly misunderstood. Women are expected to grieve in silence because society feels uncomfortable hearing them speak about their loss. I feel this leads to a lot of the depression that women who’ve suffered a loss end up feeling. You’re unable to grieve openly, having to make excuses why you don’t want to attend social functions – because you just don’t feel ready to make small talk yet; because the only thought consuming your brain is why you lost your child; when you can start trying again and will next time prove more successful? It really does consume your life which I think anyone who hasn’t been through it themselves will struggle to understand.

We told close friends from our first loss, as we wanted to be able to be honest with people about why we’d possibly withdrawn from social communication norms. With the third loss, I asked a colleague to be honest with people if they asked why I was off as I knew that waiting for it to happen naturally would take some time, and didn’t want to return after a month off to hear people ask me if I’d enjoyed my time off. I knew from experience how hard that was the first time, but I could at least mask it with the Christmas break. I want people around me, including workmates, to know what I’ve been through as it has changed me. It has made me more sensitive to certain things, but also more relaxed about others as it does change your perspective on what really matters.

With our first miscarriage we hadn’t told family we were expecting. We had planned to give them the scan picture on Christmas day. For two weeks after finding out we were losing the pregnancy we kept it to ourselves, but keeping it quiet didn’t help so I told my mum. You need people to understand why you are being quiet and that something is going on.

Response would be mixed. I would be told ‘at least it has happened now, not later’ or ‘it wasn’t meant to be.’ To me, it wasn’t early, it had been nearly 12 weeks. An old friend had experienced two miscarriages. Having been through it herself she knew I didn’t want any of the platitudes like ‘it will work next time’ so she just said ‘I’m sorry.’