Caroline describes her seventh loss, following her miracle baby, as one of the one of the most horrific and lonely experiences of her life. CBT and her support group helped her through.

It was only during a MA group support meeting that it suddenly clicked that I might have PTSD. One of the group was talking about her symptoms and I thought “that’s me!”

Having been through 6 previous losses, I thought I’d pretty much “been there done that” and knew how to get myself through them.  The support from my friends and family had always been amazing and I felt lucky that I didn’t have to go through them alone.

Then my 7th miscarriage happened and I felt all sorts of feelings I hadn’t felt before. I was 9 and a half weeks – further than I’d got for a long time – and we all thought this was my last chance to have another baby – having one miracle boy already. The day I started bleeding, I sat on the floor and sobbed.

I opted for the medical management option. The day after I took the first tablet, I sat at home on my own, not wanting to see anyone or do anything. My mum came over and I sent her away. I couldn’t face having anyone around me.

That night I started bleeding. So heavily it was uncontrollable. I was awake all night, on my own, as I didn’t want to bother my husband with it. By morning, it was clear there was something seriously wrong. I drove myself  to A&E, bleeding all over my car, and on arrival I had to tie my jumper round my waist as I had soaked through my trousers. They took one look at me and sent me to resus. I remember thinking “that’s where they take really poorly people….” 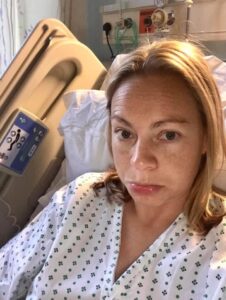 After a while I was moved to a ward to be monitored. I was bleeding, feeling weak and dirty but still felt like I was being a nuisance. The scan showed the baby had passed. When? I thought. There had been so much blood at home I couldn’t remember seeing anything that could have been the baby. That made me feel even worse. I had no idea if I’d flushed the baby down the loo. I was put on fluids and left in my room. My amazing friend who is a midwife at the hospital had sat with me for hours after coming off her night shift but I sent her home – she needed sleep and her family.

Things got a lot worse. I fainted twice when going to the loo. The first time I was alone and woke up on the floor covered in blood. I pressed the nurse button but no one came. I lay there for about 15 minute before pulling the emergency cord as I couldn’t get up. I was immediately surrounded by nurses – one of which asked me if I had meant to pull the cord as it was for emergencies only. On the way back to the bed I fainted again.

I went rapidly downhill from there. I was feeling weaker, dizzy and sick. The nurses and consultants kept saying the bleeding must stop soon and it felt like they didn’t know what to do with me. My husband turned up and I told him I felt awful so he hunted down someone to check me out. After that I don’t remember much. It was like an out of body experience. The HCA came in to check my obs and I heard her shouting for help. People flooded into the room and I could hear their voices but I didn’t have the energy to respond. I was given a blood transfusion and an emergency D&C which found a lot of material still inside me which my body was trying to eject, hence the bleeding.

I didn’t sleep at all that night and was sent home the next day, exhausted, weak, numb and in shock, but still trying to put on a brave face. Over the next few weeks, every time I closed my eyes, I saw blood and before I tried to sleep every night, my brain would show me the same images again and again – me on the floor, me in the shower with blood pouring out of me, me alone in the bed feeling helpless. I got really anxious about going anywhere I didn’t know or being around strangers. I would suddenly have panic attacks when someone tried to touch me. I cried all the time when I was alone.

It was only during a MA group support meeting that it suddenly clicked that I might have PTSD. One of the group was talking about her symptoms and I thought “that’s me!” It was such a relief to know that it was normal to feel like that and I wasn’t going mad. Ireferred myself for counselling through the NHS and after a couple of weeks, I started CBT where I was officially diagnosed with PTSD.

It was a huge weight off my shoulders just knowing that I had something I could fix and I wasn’t going to have to feel like that forever. It was so hard to explain to people who haven’t been through that kind of trauma, how I was feeling. As someone who is usually so strong and can bounce back from things easily, it took me by surprise how it really affected me mentally. I feel very lucky that I had access to CBT and the support group to help me get through one of the most horrific and lonely experiences of my life.