The Babyloss Awareness Week animation that we launched yesterday ends with the message:

“It was such a hard time and we’ll never forget our baby, but having people listen – really listen – has helped us through.”

Here at the Miscarriage Association, we’ve supported thousands of people who have been affected by pregnancy loss, and one thing we’ve heard again and again is that it can often help to talk.

However we also know that talking can be difficult. People who want to support their friends tell us that they’re worried they’ll say the wrong thing and that they sometimes say nothing in case they make things worse.

Last year, we asked our supporters to share the helpful things that others had said to them after a pregnancy loss. There were hundreds of different answers. Everyone’s experience of loss is different, of course. However, a common message that emerged is that sometimes it’s not so much what we say, as what we do: being there for a friend, really listening to what they have to say, can make all the difference in helping them through.

That’s why, this Babyloss Awareness Week, we’re asking you to use the #heretolisten hashtag as you share one of the graphics below with your friends and family, on Facebook, on Twitter, on Instagram and across social media, to say – if you want to talk about pregnancy loss, I’m here to listen. Click on the thumbnails below for full-size images. 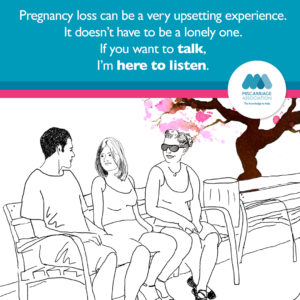 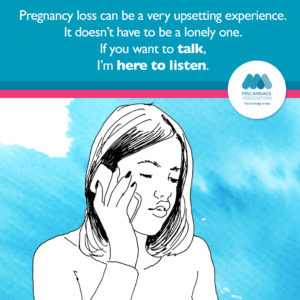 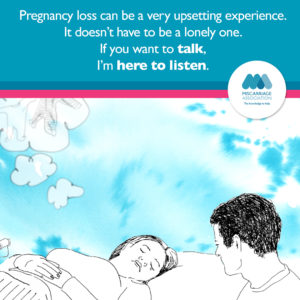 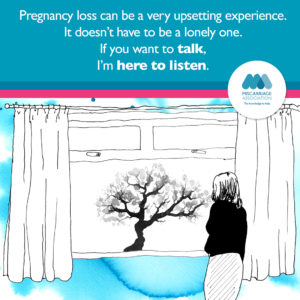 Illustrations by Emma Plunkett of planXdesign.

Two other people who will be here to listen later today are the chairs of the All Party Parliamentary Group on Babyloss.

From 2 to 3 p.m. today, the two group chairs, Will Quince MP and Antoinette Sandbach MP, will be on Twitter, asking questions to inform a special House of Commons debate about  pregnancy and baby loss this Wednesday. The Miscarriage Association will be participating in this event via our twitter account (@MiscarriageA). If you would also like to get involved, please follow the hashtag #babylossdebate.